What is the Fian?

Many people ask just what the White Bear Fian is. The answer, not surprisingly, has changed over time.

In the olden days, when Ealdormere was a Principality of the Middle Kingdom, when very few knights or masters-of-arms called our fair land home, a group of fighters banded together to prove their worth off and on the field. Aedan o Kincora and Kaffa Muirath—the first Baron and second Baroness of Septentria—founded the order, though entry into it was not theirs to grant.

To become a fianna, a challenger must present themselves to Their Excellencies Septentria, and make a formal challenge. They must be found worthy by being courteous and well rounded in pursuits. Candidates were (and are) to be able to handle a bow, show some proficiency at either song, story, dance or chess, and must also show some skill in at least one art or science.

If the baron and baroness deem the challenger worthy, then a time and place will be set for the challenger to face a fianna in combat. To gain entry the challenger must defeat a member of the Fian (chosen by the fianna) in two out of three rounds of armoured combat. If the challenger should fail, they are free to challenge again and again. If they succeed, they are inducted into the Fian and made a fianna.

Originally, the Fian was a way for the fighters of our barony to show their worth. To quote Ceallach Cu Meallain, one of the first fianna:

The Fian came into being by the will of many, and finally expressed by Baron Aedan and Baroness Kaffa that honour and dignity on the field and off, should be recognized and fostered. The political mechanism that chooses higher "Society Awards" like the Dragon's Tooth and even the accolade of Chivalry was not adequately recognizing the talents and qualities of Septentrian fighters, archers and scouts. Something was done to counteract this problem. A group based on the Irish Fiana was born.  (Ursus #143)

The first round of challenges was held on a summer day in Eoforwic in either AS 24 (1989) or AS 26 (1991). Sources vary on the subject. The first original five members of the Fian were: Sir David Martin Failsworth, Ceallach Cu Meallain, Duke Sir Finnvarr de Taahe, Alasdair of Raasey and Tai Chin Wu.

The Fian was pledged to uphold the honour of the barony, and of combat in general. Ties to the Fian were to come before any other affiliation. Over time this demand for ultimate loyalty to the barony was to loosen, for several reasons. Some members of the Fian moved out of the barony. Indeed, for some, they had no choice but to leave the barony when part of it became the Barony of Ramshaven in AS 29 (1994). Entry to the Fian was eventually opened to anyone who wanted to challenge for entry, as long as they were still found acceptable by the current Baron and Baroness of Septentria. Indeed, during the reign of Baroness Adrielle Kerrec some members of the successfully gained entry into the Fian. In AS 32 or 33 (1998) Cynred Broccan and Evander MacLachlan would be the last to gain entry for many years.

The fian faded from view, and was almost forgotten. However, in November AS 38 (2003) at the barony’s 25th Anniversary event, Hlaford Streonwald Wulfesbanna became the first new fianna in six years. He was soon followed by four others who were successful in challenging into the Fian.

It is not easy to spot a member of the White Bear Fian, as there is no badge for the order. Rather, each fianna is encouraged to design their own badge incorporating a white bear as one of the charges.

The Fian still strives for excellence both on the field and off, and is always looking for those who wish to test their mettle. The Fian currently will hold the field at any Septentrian event at which they are given the opportunity, to face any and all who would wish to engage in honourable combat, be it to attempt entry into the Fian, or simply to enjoy the battle. 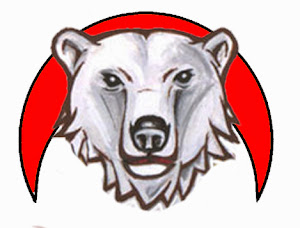